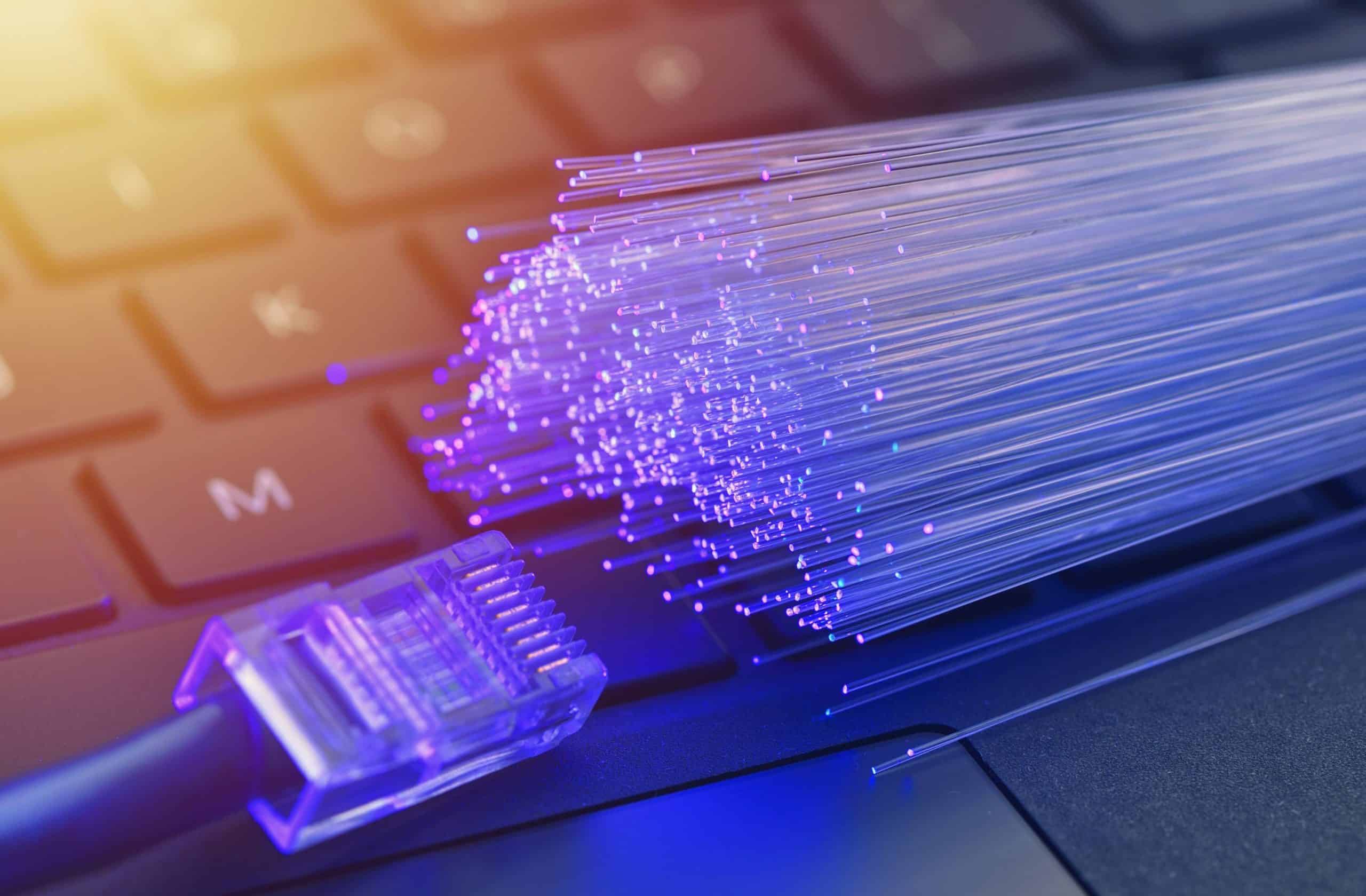 A fiber-optic link or a fiber channel is usually a part of an optical fiber communications system. It provides a data connection between two points i.e point to point communications. It consists of a data transmitter, a transmission fiber, and a receiver. For long transmission distances, extremely high data rates of many Gbps or even several Tbps can be achieved. The used components are mostly based on fiber optics. In most cases, the data transmission is digital, making the system very versatile and relatively insensitive e.g to nonlinear distortions.  The data transmission is digital, which makes the system very versatile and relatively insensitive e.g to nonlinear distortions. There are various modulation formats, i.e different methods of encoding the information. A simple non-return-to-zero (NRZ) format transmits subsequent bits by sending a high or low optical power value, with no gaps between the bits, and extra means for synchronization. In contrast to this, a return-to-zero (NZ) format is easily self-synchronizing by returning to a rest state after each bit, but it requires a higher optical transmission bandwidth for the same data rate.

The advent of optical fiber links has provided significant improvements in the communication facilities needed for the effective operation of power systems. These links are well suited to electrically noisy environments of power systems due to their immunity from electromagnetic interference. The wide information-carrying bandwidths of such systems lead to low costs per channel on trunk routes, it can conventionally accommodate extra information transmission and provide the means of rapid signal transmission which is required for protection and control under power system fault conditions. The main uses of power systems for long-haul optical fiber links include telephony, telemetry, telecontrol, protection, data transmission between computers, and video signaling.

The efficiency of an electro-optical transmitter is determined by many factors like spectral line width, which is the width of the carrier spectrum and is zero for an ideal monochromatic light source, insertion loss which is the amount of transmitted energy that does not couple into the fiber, transmitter lifetime, and maximum operating bit rate. There are two kinds of electro-optical transmitters that are commonly used in optical fiber links – the light-emitting diode (LED) and the semiconductor laser. The LED is a broad-line width light source that is used for medium-speed, short-span links in which dispersion of the light beam over distance is not a major issue. The LED is lower in cost and has a longer lifetime than the semiconductor laser.

The most common kinds of optical-electronic receivers are the positive-intrinsic-negative (PIN) photodiode and the avalanche photodiode (APD). These receivers extract the baseband signal from a modulated optical carrier signal by converting incident optical power into an electric current.  The PIN photodiode has a low gain but a very fast response, the APD has a high gain but a slower response.

An optical fiber consists of a transparent core sheathed by a transparent cladding and by an opaque plastic protective coating. The core and the cladding are dielectrics with different indexes of refraction. The cladding has a lower refractive index than the core. The abrupt change in the refractive index between the core and the cladding makes the inside of the core-to-cladding interface highly reflective of light rays that gaze at the interface. The bandwidth of an optical fiber is limited by a phenomenon known as multimode dispersion.

Different reflection angles within the fiber core create different propagation paths for the light rays. Multimode dispersion causes a signal of uniform transmitted intensity to arrive at the far end of the fiber in a complicated spatial “interference pattern”, and this pattern, in turn, can translate into pulse “spreading” and ISI (Intersymbol Interference) at the receiver end. When the index of refraction is constant within the core, the fiber is called a stepped-index (SI) fiber. Graded Index (GI) fiber reduces multimode dispersion by grading the refractive index of the core so that it smoothly tapers between the core center and the cladding.

Noise in an optical fiber link is introduced by the photoelectric conversion process at the receiver. Losses in signal power are primarily caused by radiation of light energy to the cladding as well as absorption of light energy by silica and impurities in the core. The production process for manufacturing optical fiber is extremely demanding which requires very close tolerances on core and cladding thickness.

An optical link in telecommunications that consists of a single end-to-end optical circuit. The simplest form of the optical link is a cable of optical fibers, which are concatenated into a dark fiber link. Other forms of the optical link can include single color links over a wavelength division multiplex infrastructure, and/or links that use optical amplifiers to compensate for attenuation over long distances. Other forms of optical links include free-space optical telecommunications links. While most fiber-optic links are used for transmitting data, there are also similar systems for the distribution of ultra-precise timing signals. The ultra-precise pulse-to-pulse spacing of a mode-locked laser is quite well preserved even over a link length of tens of kilometers. In the operation of a digital optical fiber link, first, a light source launches a certain amount of optical power into a fiber.

255Tbps is the world’s fastest network that could carry all of the internet’s traffic on a single fiber.